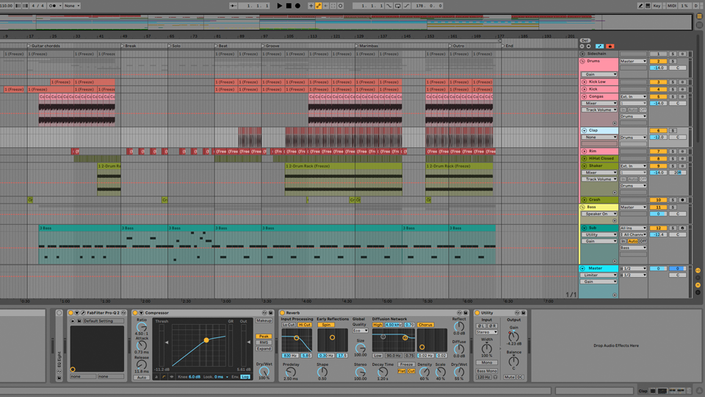 The coupon code you entered is expired or invalid, but the course is still available!

In my private lessons with students I very often get the same question: How to make my songs match those top Beatport tracks?
The truth is, even if you produce good tracks from a composition/arrangement point of view, if it lacks balance, clarity and power - it still won’t sound professional.

In fact, there are a lot of tracks in the Beatport top-100 charts that are not all that great from an artistic point of view, but they still sound great and are able to capture the listeners attention. Now I’m not saying that you should go and write crappy songs, the message here is that you should never underestimate the power of mixing.

But here’s the problem - most of the mixing courses out there are focused on techniques that came from the analogue studio times, where people recorded their songs on large mixing desks and had limited abilities to transform the sound.

On top of that, in almost all cases the songs were written by different guys than the ones mixing it, a completely different mindset!
As with most technological developments the technology always tends to be faster than our understanding and adaptation in regards to this new technique. We simply don’t feel comfortable when the rules change, even though this “change of rules” requires a new workflow and a different approach to accommodate the new developments.

For modern producers mixing is an indisputable part of their production process; You don’t wait until your track is ready to start mixing, you write and mix at the same time. You want to hear how it sounds while producing, as good sounding tracks inspire you to make it even better.

To give you an introduction on how mixing is done by modern electronic music producers, I’ve made a short FREE mixing course, all you need to do is sign up to the school and you can start watching the course today!

First Section
Available in days
days after you enroll

When does the course start and finish?
The course starts now and never ends! It is a completely self-paced online course - you decide when you start and when you finish.
How long do I have access to the course?
How does lifetime access sound? After enrolling, you have unlimited access to this course for as long as you like - across any and all devices you own.